Watching the sunset transforming  sandstone into gold, an adventure from pre-children was evoked. We were at Baerami Bush Dance weekend. This is a lovely annual event where a terrific bunch of mixed aged people come together to share food dance or play acoustic melodies with their roots firmly planted in traditional Irish, English, Scottish and European folk tunes. A long standing friend was inviting us on a walk in the Mount Olive region. The sun was setting, and the memory flooded back...

The hubby and I were recently married. Our only method of transport had broken down. This is a problem in Aussie rural areas as there is no public transport. So we decided to hitch-hike (this was back when I trusted without thought). Off we walked, in a set of shorts and tea shirts, a hat, a bag with cooked potatoes (for dinner), water and joyful hearts. Not too much later, along comes our ride; an older man (probably my age now!) and as it is a country road, says hop in the back. Now let me set the scene, the car is an old worn out  flat tray ute and the dog guarded viciously the passenger seat in the front. The tray was uncovered and full to the brim with a bunch of eclectic items, ranging from tools to tea pots. And, like the prestigious personality she was, a bigger than life statue of Marilyn Munro, skirt flying out in all directions and eyes seductively inviting us to sit at her feet. We decided the car would only do a couple of kilometers per hour up those mountain trails, so the risk of crashing seemed minimal compared to the risk of lung cancer in the cab with our train smoking driver and cranky dog. So we jumped in, as Old Mate shouted out the window over his shoulder, "Now don't forget to hide if we come across any coppers." Sure we thought, under Marilyn's skirt!

We arrived at the end of the road without incident,  thanked old Mate from a safe distance from Blue Dog's snapping jaws, blew Marilyn a kiss and started out for our friends place through the bush.  Arrived as the sun was setting with a story, had missed all the day's activities making mud bricks, and was just in time for music, fire and our cold potatoes. We slept in the back of another ute, starting to think we must really like utes, under a greasy tarp. Wow, how far from this have we now come. Our adventures involve minus degree down sleeping bags with silk liners and lightweight mozzie proof tent. Back then we cuddled up cozy and happy as two doves in a nest, still intoxicated with our recent Baha'i marriage ceremony and drunk on love.

After a lazy beginning, we started to make our way, across a mountain range to meet a friend who was spending the day trail riding on motorbikes in the next valley. Yes Good Friend had said Friday night, "yeah, we'll be there to pick yas up and take you back home."

This had been at a chance meeting in Wallsend, Newcastle. Now I'll need to explain this story in a story in a story. The hubby was playing music at Mount Olive on the Saturday night, but he needed his guitar. His guitar happened to be over an hour away in Newcastle, so after work on Friday, he gets a lift to Newcastle with a colleague. After picking up his guitar, he happens to pop into the local Tavern where old school mates get together. There he meets Best Friend from years and years ago. After chatting, Best Friend and Hubby realise that they will be relatively close on the weekend, as Best Friend is riding motorbikes in Mount Royal National Park, not too far from where we were going on Saturday. So they come up with the plan for getting us home on the Sunday, the only thing is it involved us walking through the bush across ridges and valleys to meet up. The Best Friend pops home to get the topographic maps so a randevu point can be set. All good says Hubby, see you Sunday on sunset.

The Hubby then set out for home, hitch-hiking. The night was wearing on and a man (who becomes Best Friend for the Future) stops and picks the Hubby up because as he tells the story, he had a guitar. Future Best Friend brings the Hubby all the way home at about 4 am, sets a date to catch up and play music together and says goodbye.

Now back to the original story, Sunday morning at Carrowbrook;  we walked through bush all day, minus potatoes but still with hat and water.

The sun started to set, and I can't remember if it was lovely as I was worried. There would be no ute and tarp that night if we didn't make it to the next valley. And what if Best Mate had left. "Nah' says Hubby, "he'd never just leave us out here. Don't worry, we are nearly there." But, I countered, you hadn't seen him for about 10 years.

He was right, before the sunset had changed to ink purple and mauve, we arrived in the valley that had all the bike trails hatched along next to the creek. Good, I remember thinking, we have water.

We smelt the 2-Stoke before we heard the sound of an off-road bike revving along the track, at high speed it seemed. The Good Friend skidded to a stop, smiled through the helmet and said "Good you're here, gotta go quick, you first and then I'll be back for you soon." On I jumped (no helmet, what was I thinking) and hung on to hat and Best Mates waist. Why the hurry I absurdly thought as we got air over a jump. After dumping me at the car he left without a word. Still shocked, I stood for a while looking at the final sun's rays stroking the sandstone. Until I heard groaning from the back of the car. What? Oh yeah, there was another bike on the trailer, must be Best Mate 2. In I went with a cheery, "Hi". Best Mate 2 didn't answer as he was concussed after falling from his bike. I paused, what was it you do for concussion and bleeding head wound again? Vowing to myself to get a first aid certificate I tried to make him comfortable. What seemed like an eternity later, Hubby and Best Mate came skidding to a stop, worked together like a machine to get the bike secured and buckled up as we drove off to the closest hospital. Turned out OK, Best Mate 2 was fine, after a couple of days.

I asked Best Mate 1 why he didn't take him to the hospital straight away. He answered that he considered it, but as he seemed OK and the weather report had said there was a cold snap that night, he thought he'd get us and then get Best Mate 2 to help, anyway, he said, I'd told ya I'd be there.

Future Best Mate did come and play music with Hubby, they played so well together that it was the beginning of a friendship that has had them in all different bands over the years and are still playing together.

And as for Marilyn, we never found out where she ended up, but are grateful for the afternoon spent together breathing petrol and dust in the Mountains.

Gut Instinct | Long way there We embark on the road trip in the familiar way, cramped and folded into the car, tetchy, complaining and ... 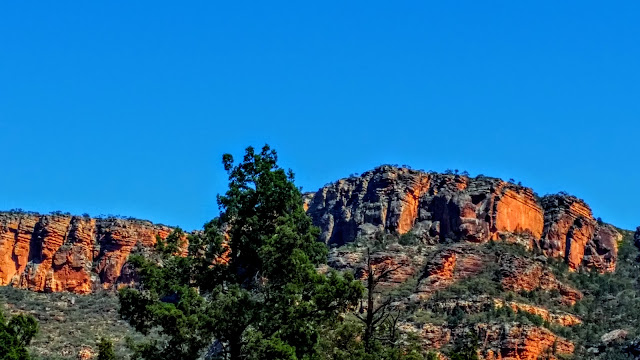